- January 28, 2011
What do you get when you cross Turandot with comics? A whole bunch of awesome.

Earlier this week the Aria Serious crew invited some comic book artists to sketch a rehearsal of Turandot. While many did not show (we've since been told working with comic book artists is like herding cats) what we did receive was 28 individually wrapped presents that delighted us to no end.

While this isn't the first time we've touched on comics and opera, what we're about to share excites us to no end.

The sketches below are by Eric Shanower. Eric is a two time Eisner award winner and a New York Times bestselling author who's ongoing epic work, The Age of Bronze, is a detailed retelling of The Trojan War. Eric is also known for his Oz novels and comics. We've included links to his home page above and if you love comics, good storytelling and incredible art you owe yourself a visit.

We also did a little Q&A session with Eric which you can find below. But you came here for his art. So, without further ado we proudly present Turandot as seen by Eric Shanower. 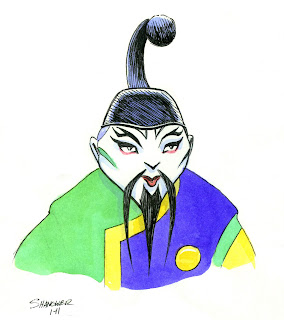 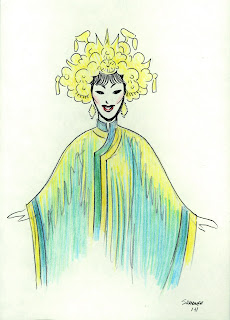 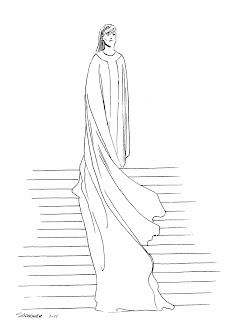 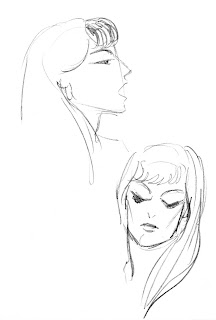 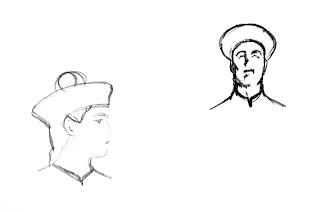 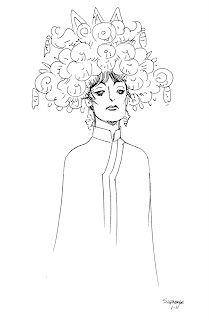 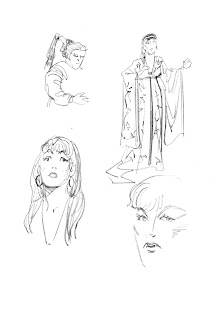 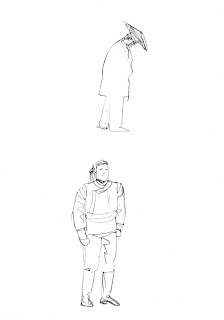 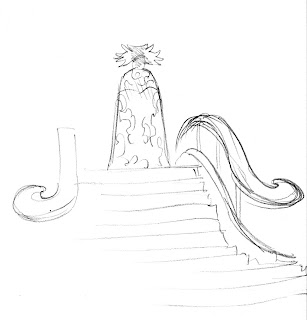 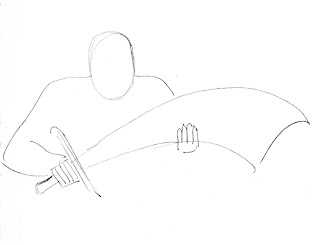 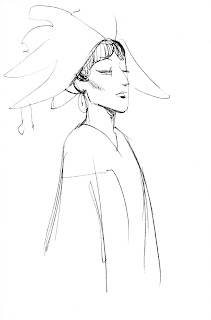 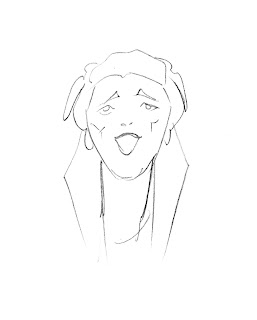 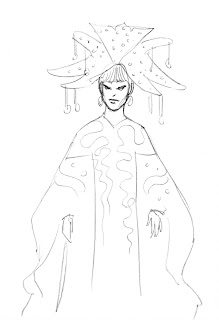 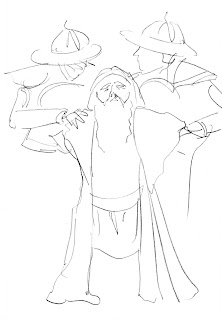 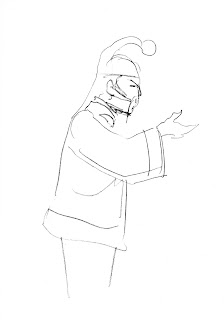 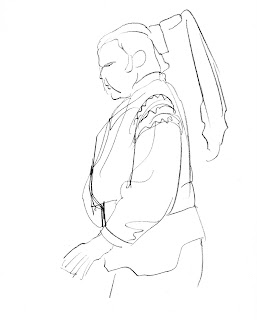 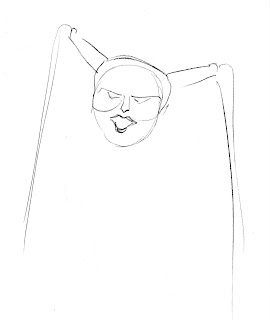 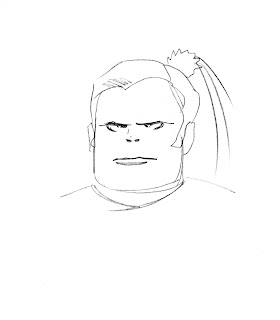 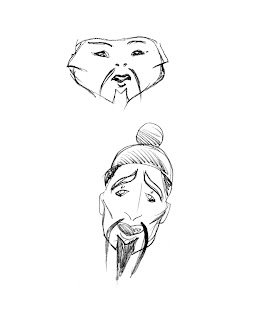 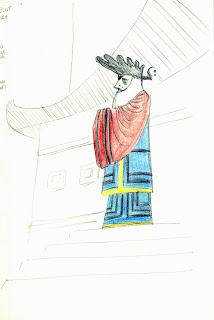 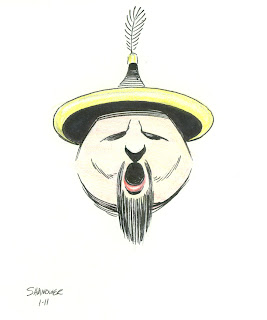 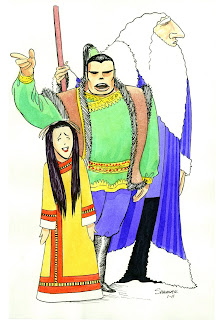 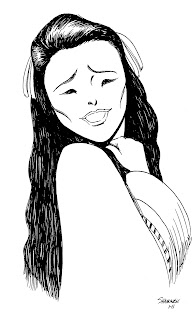 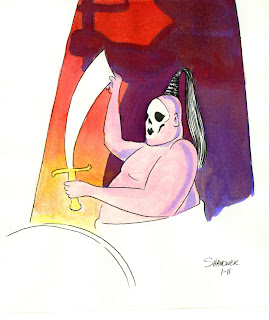 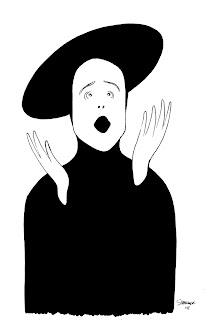 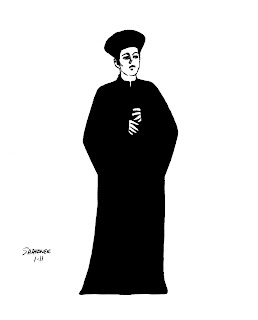 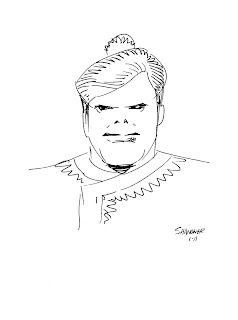 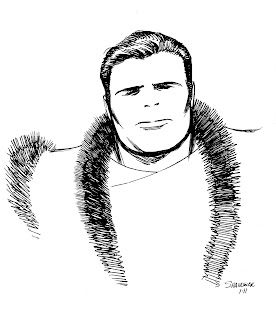 Q & A with Artist Eric Shanower:
Aria Serious (A.S.): First off congratulations on Age of Bronze – this how I first heard of you. For our readers who are new to comics – Age of Bronze is the historic retelling of the Trojan War. You’ve been working on this project for over a decade now. What first drew you to this subject matter?

Eric Shanower (E.S): I listened to a book on tape called The March of Folly: From Troy to Vietnam by Barbara W. Tuchman. Her chapter on the Trojan War made me realize there are many different versions of the story. I thought it would be a great project to synthesize all the versions together while setting it in the correct time period, the Aegean Late Bronze Age. I thought it would make a fascinating comic book, and so I began work on Age of Bronze.

Of course, there are plenty of operas that have been written about the Trojan War. The one I’ve worked with most recently in Age of Bronze is Troilus and Cressida by William Walton. A Trojan War opera that I saw at San Diego Opera was Idomeneo by Mozart about ten years ago.

A.S.: I hear you are also writing the comic adaption to Baum’s Wizard of Oz for Marvel – what is it like to write a straight adaption of a story known and loved by generations of people? How do you make it your own?

E.S.: We’re way past The Wonderful Wizard of Oz now. Baum’s third Oz book, Ozma of Oz, is actually being serialized currently. I’m about to start adapting the fourth book in the Oz series, Dorothy and the Wizard in Oz. These Marvel Comics Oz adaptations have been really popular. I’ve been an Oz fan ever since I was six years old and have worked on countless Oz comics and books before this Marvel Comics Oz series, so it’s pretty much business as usual to be working with this material. For these adaptations of the Oz books, I don’t try at all to make them my own. I just adapt the books as L. Frank Baum wrote them.

E.S.: I don’t remember. I’ve always been interested in drawing as far as I know.

A.S.: This wasn’t your first opera, when did you first experience it? What did you think of it?

E.S.: The first production of an opera I saw was Tchaikovsky’s Eugene Onegin at Chautauqua Institution, done in English. I recall liking it, although I was shocked that Onegin decides to die at the end—that was back when I refused to read synopses because I decided that every opera performance must communicate its story to the audience without off-stage help or else it’s a failure. These days, however, I mostly read synopses when I go to the opera.

As a native English speaker I like opera in English because it’s more immediate. I wish that more opera in the USA were done in the country’s dominant language—in good translations. Of course, then the singers would have to memorize new words, which I guess could be a challenge.

A.S.: What did you think of Turandot?

E.S.: Great design. Great drama. I was already familiar with the music and like it, but it was really nice to hear played by a live orchestra. I was a little disappointed that the leads were saving their voices during the rehearsal I saw, but that wasn’t unexpected. Overall I thought every aspect of the production was terrific.

I was actually surprised that I liked the set so much. I’m not a big David Hockney fan.

A.S. When I checked in with you during an intermission you told me you felt like the live sketching was like “work.” That surely wasn’t our intent. What was some of the hurdles you faced last night while drawing?

E.S.: I had never drawn like this during a stage performance before. When I go to the theatre, it’s to watch the show. You had no expectations of me except to draw whatever I wanted, but that meant that I had no guidelines either. I really had no particular plan on how to approach it except to draw. I brought some colored pencils, expecting to use them and I did. As a visual storyteller, I’m drawn first and foremost to the characters, so that’s what I ended up drawing for the most part. I thought a lot beforehand about the work of Al Hirschfeld, the famous theater cartoonist, so I have to admit that I began drawing during the performance trying to channel him. But other than that I didn’t have a firm approach in mind. And drawing is my work, so of course the experience was just like work for me.

A.S.: Did the music help dictate what you drew?

E.S. No, it didn’t. I was far more intent on the visual aspects. While I’m drawing I can’t really pay conscious attention to sound. Although I listen to music much of the time when I draw, it’s always background.

A.S.: Anything coming up our readers should know about?

E.S.: Just had a couple projects come out this month: I penciled issue #101 of the popular comic book series Fables, published by Vertigo/DC Comics. Oxford University Press just brought out a volume on the use of Greek and Roman classics in comics, titled Classics and Comics, and I contributed a 12-page story about Age of Bronze, my Trojan War comic book. Marvel Comics is currently bringing out the comics adaptation of L. Frank Baum’s Ozma of Oz with script by me and art by Skottie Young—issue 4 will be out soon. And for all you San Diegans out there, come see me at the San Diego Comic Con in July, booth 2008.
Eric will join us later this year for Faust.
Artwork © copyright 2011 by Eric Shanower. All rights reserved.

San Diego Opera said…
Yes. Of all the operas this season, Turandot would be the best for a well behaved 9 year old. The acts are short, the sets are bright and colorful and it's a great first opera.
January 28, 2011 at 12:59 PM 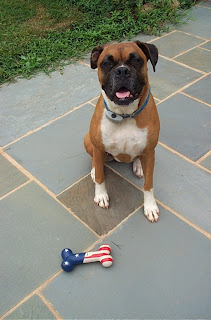