Showing posts from March, 2014
Show all

A MASKED BALL by Scott Benefiel 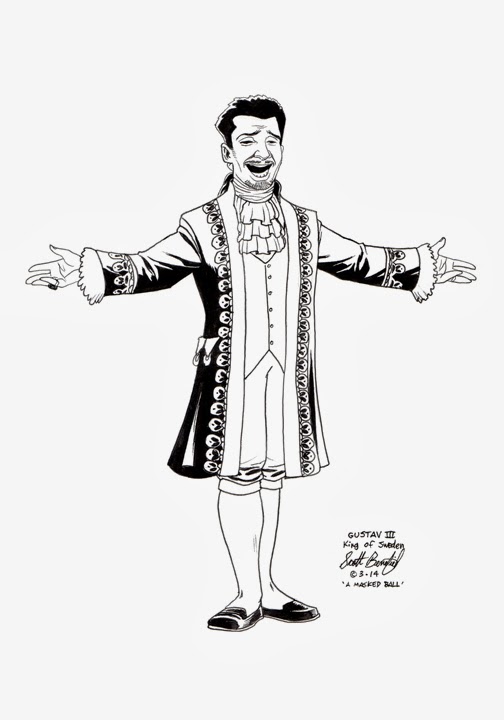 Today is starting out wonderful. Not only do we have a performance of A MASKED BALL tonight, but artist Scott Benefiel just sent over his sketches from Comic Artist Night at the Opera. Scott has been an illustrator for several years working as a storyboard, comic book, and conceptual artist for most of his professional life. Recently he designed VFX storyboards for the new COSMOS TV series (which, if you have not seen yet, is awesome), and was part of Aaron Sowd Productions where he created pre-vis storyboard art on feature films for Will Smith's Overbrook Productions. He was a cinematic storyboard artist for 343 Industries on the video game Halo 4 as well. Recent creative endeavors include writing and starring in t he internet series Ghost Provokers , a parody of the ghost hunting shows which currently proliferate the airwaves. He also writes and draws the webcomic Cork . You can see more of Scott's work at his website . Artwork © copyright 2014 by Scott Benefiel. All
Post a Comment
Read more

A MASKED BALL by Joe Sanabria 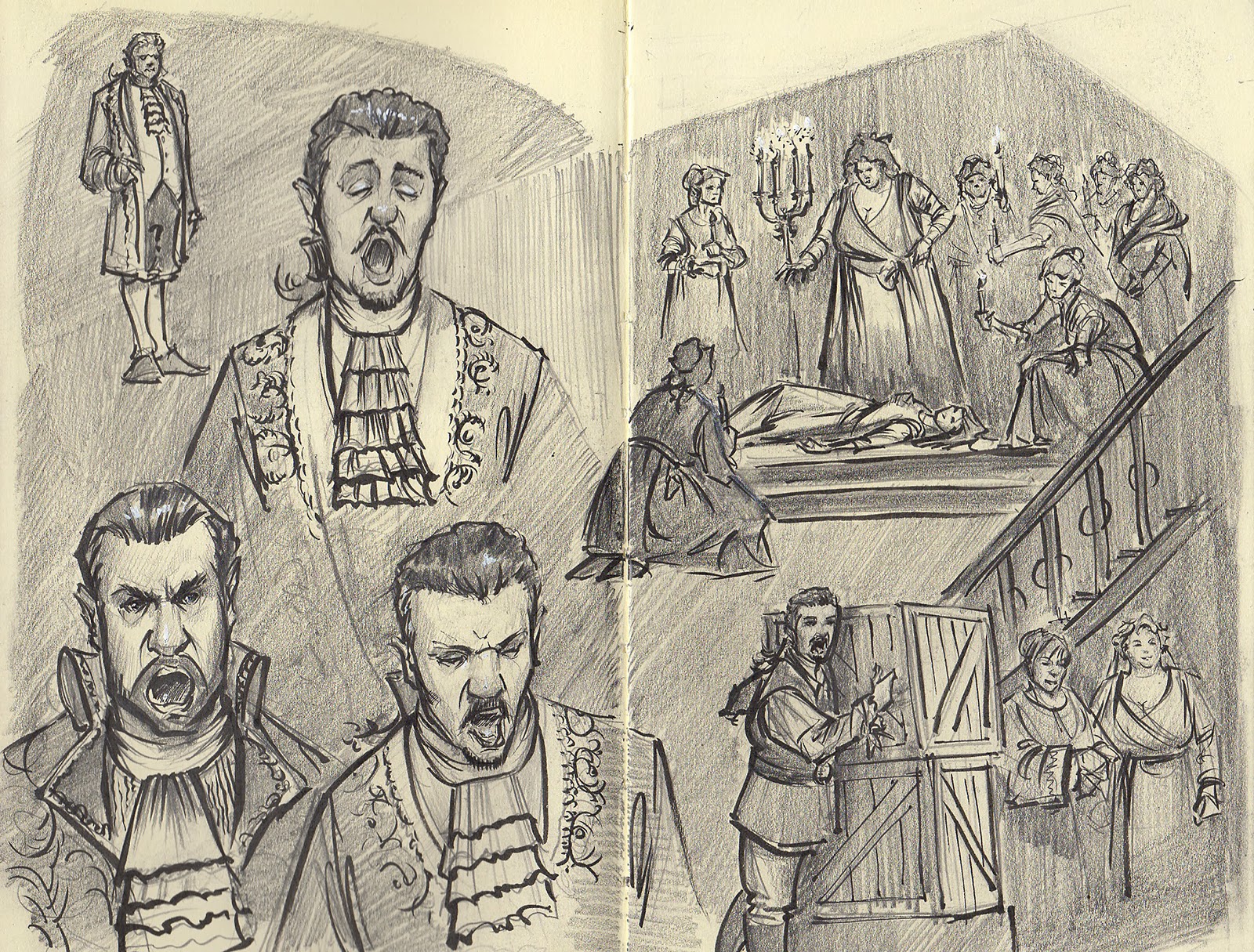 Artist Joe Sanabria watched one of the final rehearsals of A MASKED BALL last week and just sent over his sketches. And we sure do love them. Even better, Joe sent over a video of how he makes his incredible drawings. And for someone who spends 20-minutes working on stick figure, watching him work is like watching magic being explained. Check out his sketches below, watch the video of him making the sketches, t hen check out his website for more of his amazing work . Artwork © copyright 2014 by Joseph Sanabria. All rights reserved.
1 comment
Read more

A MASKED BALL by Batton Lash 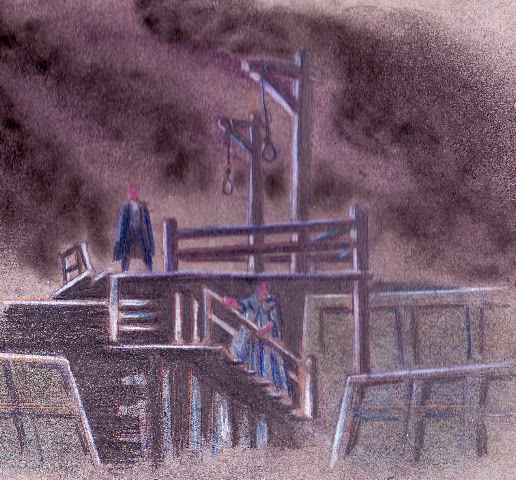 Cartoonist Batton Lash joined us for rehearsals of a A MASKED BALL last week and just sent over his sketches. To learn more about this event and Batton, you can read this piece on Comic Night at the Opera on Culture Buzz. Then head on over to Batton's website Exhibit A Press to see what he's been up to lately. Artwork © copyright 2014 by Batton Lash. All rights reserved.
1 comment
Read more

A MASKED BALL by Eric Shanower 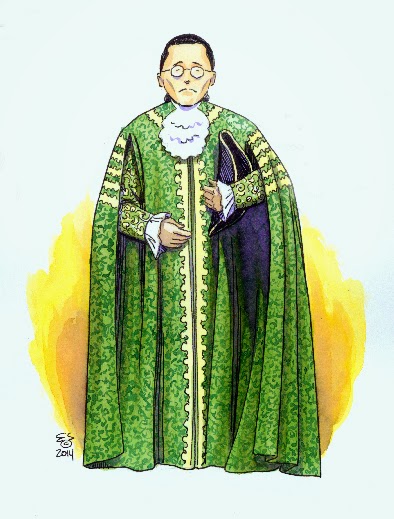 The tradition continues of having comic book artists join our final rehearsals, and our longest running artist, Eric Shanower, has sent over his sketches. Here's a lovely piece about Comic Artist Night at the Opera featuring Eric Shanower. Afterwards, head over to Eric's Hungry Tiger Press to see what he's been up to lately. Artwork © copyright 2014 by Eric Shanower. All rights reserved.
1 comment
Read more

- March 07, 2014
San Diego Opera is delighted to have tenor Piotr Beczala back to sing King Gustav ('Gustavo') in Verdi's A Masked Ball. In this interview with Nicolas Reveles, Director of Education and Outreach, he talks about the role, other Verdi characters he sings, 'updated' productions of opera and his recent appearance at The Met in Rusalka. You'll also hear a bit of one of his arias from Ballo. Enjoy!
Post a Comment
Read more

- March 06, 2014
In a continuation of her conversation with San Diego Opera Education Director Nicolas Reveles, mezzo-soprano Stephanie Blythe turns her attention to the growth of the young singer, focusing on her work with the Fall Island Vocal Arts Seminar. Working with young artists energizes Ms. Blythe and she has strong opinions about what singers need when they are beginning their careers. This podcast is a must see for voice students looking to connect totally with their art!
Post a Comment
Read more

On Tuesday, March 4, our  A Masked Ball Digital Scavenger Hunt started. James Schindler finished the first scavenger hunt the fastest and won an A Masked Ball poster by R. Black.  Here's a short recap of the clues and hunt. Don't forget to come back on  Friday for the chance to win a 2014 Season t-Shirt with artwork by R. Black. Our Final and more challenging A Masked Ball Digital Scavenger Hunt  starts at  our Facebook Page  on Friday, March 7, at 10 am. March 4, 2014 At 10 am we posted the following post on Facebook: The clue read backwards says:  “The conspirators on San Diego Opera's Pinterest Page hold the key. Find them plotting.” On San Diego Opera's Pinterest Page the folder 'First Days of A Masked Ball rehearsals' can be found: One of the photos shows Kevin Langan (Count Ribbing) and Ashraf Sewailam (Count Horn). The text reads: It is also the only picture that is linked to YouTube.  If one clicks on the picture twice, the
Post a Comment
Read more

- March 04, 2014
Mezzo-soprano Stephanie Blythe is well known to opera audiences, especially through the Metropolitan Opera's HD broadcasts. She is making her debut with San Diego Opera in the critical role of Ulrika Arvidson in Verdi's A Masked Ball, one of her favorite roles. In this two-part conversation with Education Director Nicolas Reveles, she discusses the role itself and her connection with the great mezzo/contralto roles of Verdi. Enjoy!
Post a Comment
Read more

- March 03, 2014
Greek baritone Aris Argiris is making his debut with San Diego Opera in the role of Anckarstrom in A Masked Ball by Giuseppe Verdi. In this conversation with Nicolas Reveles, Director of Education, he talks about his career, Verdi's baritone roles and singing with such great maestri as Zubin Mehta. Enjoy! codeword: BALLO #DSH
Post a Comment
Read more

Get ready for our A Masked Ball Digital Scavenger Hunts

How it works San Diego Opera's  A Masked Ball Digital Scavenger Hunts  will take place online on Tuesday, March 4, and Friday, March 7, 2014. At 10 am PT we will post the first clue on  our Facebook Page  which will lead to the next clue and so on until participants find a codeword and an e-Mail address to send it to. We will start with an easy scavenger hunt on Tuesday where the first two participants to finish will each win a poster of  A Masked Ball by R. Black. On Friday we will have our final  A Masked Ball Digital Scavenger Hunt  which is going to be more challenging. The first person to finish this one receives one of our 2014 season t-Shirts with all four opera art works on it. Check out last month's  The Elixir of Love Digital Scavenger Hunt   to get an idea of how our scavenger hunts work. The prizes On Tuesday the first two participants who send in the right codeword will get a poster of R. Black's  A Masked Ball.  Friday's winner will receive a Sa
Post a Comment
Read more
More posts